Difference between revisions of "Avascular tumor"

From Biocellion
Jump to: navigation, search

The US National Center for Health Statistics lists Cancer as the second most common cause of death, responsible for 574,743 deaths in 2010. Understanding the formation and development of cancerous tumors will allow health professionals to better detect, diagnose, and treat cancer in its early stages. As avascular tumors (tumors without any blood vessels in them) grow rapidly, the cells inside start dying. Eventually these dead and dying cells create a necrotic core in the tumor. The formation of this necrotic core is an important phenomenon because it can often bee seen in x­rays and mammograms allowing heath care professionals to detect and diagnose the cancer.

Development of The Necrotic Core

To model the formation of a necrotic core in the center of a tumor. Our model keeps track of four different cell states:

Proliferating (Blue) Represents a healthy growing cell. Proliferating cells consume glucose to grow. When they reach a specified volume they divide into two daughter cells that are both also in the proliferating state.

Stasis (Green) Represents a cell in an environment where there is not enough glucose to continue growing, but sufficient to maintain the life and functions of the cell. After become static the volume of these cells don't change. These cells also never divide.

Necrotic (Yellow) Represents a cell in an environment where there is not enough glucose for the cell to survive. Necrotic cells are starving and as a result their volume is decreasing.

Calcified (Red) Represents the dead remains of a cell. These calcified remains have increased adhesion to each other and as a result often form clumps near the center of the tumor. Each calcified cell has very low volume. 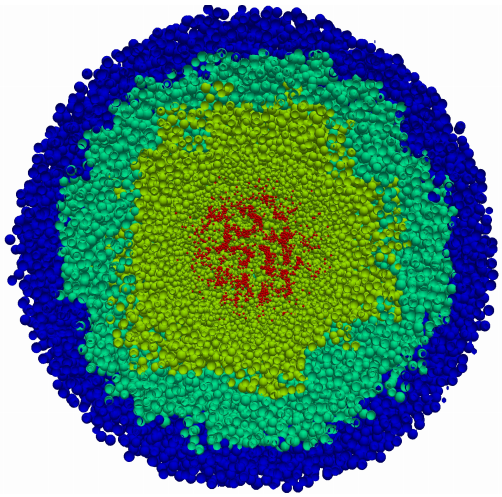 This tumor model was developed using a new high performance framework for biological simulations called Biocellion. Biocellion is still under active development and not yet available for general use. This model is part of an early effort to test the framework and establish its value. The Biocellion framework allows computational biologists to have the benefits of high performance computing across many nodes in a cluster without having to worry about how to parallelize the model. Biocellion handles all the load balancing and parallelization of the model while allowing for a broad range of model implementations that can be used for many different kinds of simulations.

Model Implementation The model begins with a single Proliferating cell in a glucose rich environment. The tumor grows consuming glucose and cells start to move into the other states. Because our domain is of a fixed size and their is no source of glucose other than the initial amounts, eventually the glucose is consumed and all of the cells become Calcified. One of the major goals was to get a layered tumor with each cell type forming a layer. Because cell type changes glucose consumption the parameters of when a Proliferating Cell should Change to Stasis, when Stasis should change to Necrotic and at what volume Necrotic should become Calcified; getting a layered tumor with each of the cell types present was very sensitive and required many iterations. 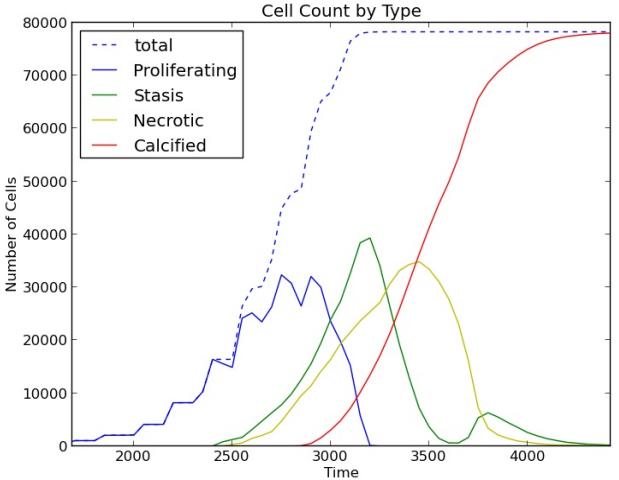 Fig 2. Number of cells vs time 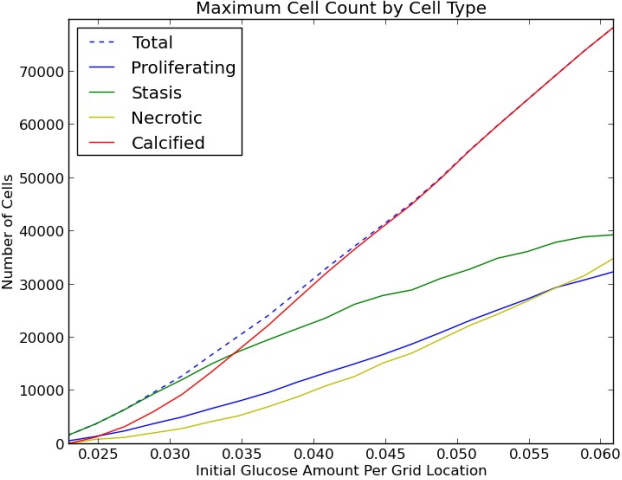 Figure 2 shows the growth curves of each cell type in a successful simulation. Three humps can be seen in the figure as the cell types change with the environment eventually all starving and becoming calcified. The cells in the center of the tumor transition through the stages the more quickly than those on the surface of the tumor because glucose has previously been consumed lowering the glucose levels in the middle. After getting the model to work, we tested it with a large variety of initial glucose levels. The results are summarized in Figure 3. The total number of cells was observed to have a linear relationship with the initial glucose level. This was expected because there are no additional sources of glucose in the model so the initial amount corresponds to the number of cells that could grow.